Because these disorders afflict the rectum, people are often embarrassed or afraid to confer with a medical professional. 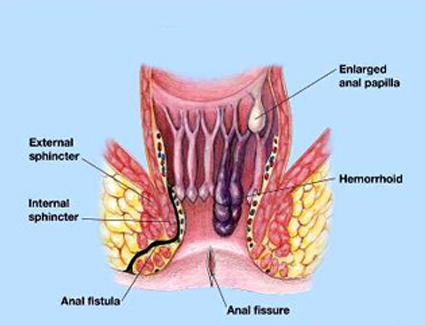 Hemorrhoids, also spelled haemorrhoids, are vascular structures in the anal canal. In their normal state, they are cushions that help with stool control. They become a disease when swollen or inflamed; the unqualified term "hemorrhoid" is often used to mean the disease. The signs and symptoms of hemorrhoids depend on the type present. Internal hemorrhoids usually present with painless, bright red rectal bleeding when defecating. External hemorrhoids often result in pain and swelling in the area of the anus. If bleeding occurs it is usually darker. Symptoms frequently get better after a few days. A skin tag may remain after the healing of an external hemorrhoid.

Often, no specific treatment is needed. Initial measures consists of increasing fiber intake, drinking fluids to maintain hydration, NSAIDs to help with pain, and rest. Medicated creams applied to the area are poorly supported by evidence. A number of minor procedures may be performed if symptoms are severe or do not improve with conservative management. Surgery is reserved for those who fail to improve following these measures.

Half to two thirds of people have problems with hemorrhoids at some point in their lives. Males and females are affected about equally commonly. Hemorrhoids affect people most often between 45 and 65 years of age. It is more common among the wealthy. Outcomes are usually good. The first known mention of the disease is from a 1700 BC Egyptian papyrus.

In about 40% of people with pathological hemorrhoids there are no significant symptoms. Internal and external hemorrhoids may present differently; however, many people may have a combination of the two. Bleeding enough to cause anemia is rare, and life-threatening bleeding is even more uncommon. Many people feel embarrassed when facing the problem and often seek medical care only when the case is advanced.

If not thrombosed, external hemorrhoids may cause few problems. However, when thrombosed, hemorrhoids may be very painful. Nevertheless, this pain typically resolves in two to three days. The swelling may, however, take a few weeks to disappear. A skin tag may remain after healing. If hemorrhoids are large and cause issues with hygiene, they may produce irritation of the surrounding skin, and thus itchiness around the anus. Internal hemorrhoids usually present with painless, bright red rectal bleeding during or following a bowel movement. The blood typically covers the stool (a condition known as hematochezia), is on the toilet paper, or drips into the toilet bowl. The stool itself is usually normally coloured. Other symptoms may include mucous discharge, a perianal mass if they prolapse through the anus, itchiness, and fecal incontinence. Internal hemorrhoids are usually only painful if they become thrombosed or necrotic.

The exact cause of symptomatic hemorrhoids is unknown. A number of factors are believed to play a role, including irregular bowel habits (constipation or diarrhea), lack of exercise, nutritional factors (low-fiber diets), increased intra-abdominal pressure (prolonged straining, ascites, an intra-abdominal mass, or pregnancy), genetics, an absence of valves within the hemorrhoidal veins, and aging. Other factors believed to increase risk include obesity, prolonged sitting, a chronic cough, and pelvic floor dysfunction. Evidence for these associations, however, is poor.

During pregnancy, pressure from the fetus on the abdomen and hormonal changes cause the hemorrhoidal vessels to enlarge. The birth of the baby also leads to increased intra-abdominal pressures. Pregnant women rarely need surgical treatment, as symptoms usually resolve after delivery. Internal hemorrhoids originate above the dentate line. They are covered by columnar epithelium, which lacks pain receptors. They were classified in 1985 into four grades based on the degree of prolapse:

External hemorrhoids occur below the dentate or pectinate line. They are covered proximally by anoderm and distally by skin, both of which are sensitive to pain and temperature.

A number of preventative measures are recommended, including avoiding straining while attempting to defecate, avoiding constipation and diarrhea either by eating a high-fiber diet and drinking plenty of fluid or by taking fiber supplements, and getting sufficient exercise. Spending less time attempting to defecate, avoiding reading while on the toilet, and losing weight for overweight persons and avoiding heavy lifting are also recommended.

Conservative treatment typically consists of foods rich in dietary fiber, intake of oral fluids to maintain hydration, nonsteroidal anti-inflammatory drugs, sitz baths, and rest. Increased fiber intake has been shown to improve outcomes and may be achieved by dietary alterations or the consumption of fiber supplements. Evidence for benefits from sitz baths during any point in treatment, however, is lacking. If they are used, they should be limited to 15 minutes at a time.

While many topical agents and suppositories are available for the treatment of hemorrhoids, little evidence supports their use. Steroid-containing agents should not be used for more than 14 days, as they may cause thinning of the skin. Most agents include a combination of active ingredients. These may include a barrier cream such as petroleum jelly or zinc oxide, an analgesic agent such as lidocaine, and a vasoconstrictor such as epinephrine. Some contain Balsam of Peru to which certain people may be allergic.

Flavonoids are of questionable benefit, with potential side effects. Symptoms usually resolve following pregnancy; thus active treatment is often delayed until after delivery.

A number of office-based procedures may be performed. While generally safe, rare serious side effects such as perianal sepsis may occur.

Abscesses can recur if the fistula seals over, allowing the accumulation of pus. It can then extends to the surface again - repeating the process.

Treatment, in the form of surgery, is considered essential to allow drainage and prevent infection. Repair of the fistula itself is considered an elective procedure which many patients opt for due to the discomfort and inconvenience associated with an actively draining fistula.

Depending on their relationship with the internal and external sphincter muscles, fistulae are classified into five types: Diagnosis is by examination, either in an outpatient setting or under anaesthesia (referred to as EUA — Examination Under Anaesthesia). The fistula may be explored by using a fistula probe (a narrow instrument). In this way, it may be possible to find both openings. The examination can be an anoscopy. Diagnosis may be aided by performing a fistulogram, proctoscopy and/or sigmoidoscopy.

Other conditions in which infected perianal "holes" or openings may appear include Pilonidal cysts/sinuses.

There are several options: Local application of medication to relax the sphincter muscle, thus allowing the healing to proceed, was first proposed in 1994 with nitroglycerine ointment, and then calcium channel blockers in 1999 with nifedipine ointment, and the following year with topical diltiazem. Branded preparations are now available of topical nitroglycerine ointment (Rectogesic (Rectiv) as 0.2% in Australia and 0.4% in UK and US), topical nifedipine 0.3% with lidocaine 1.5% ointment (Antrolin in Italy since April 2004) and diltiazem 2% (Anoheal in UK, although still in Phase III development). A common side effect drawback of nitroglycerine ointment is headache, caused by systemic absorption of the drug, which limits patient acceptability.

LIS does, however, have a number of potential side effects including problems with incision site healing and incontinence to flatus and faeces (some surveys of surgical results suggest incontinence rates of up to 36%).

Though lateral internal sphincterotomy (LIS) is considered safe on short-term basis, there are concerns about its long-term safety. Pankaj Garg et al. published a systematic review and meta-analysis in which they analyzed the long-term continence disturbance two years after the LIS procedure. They found the incidence of long-term continence disturbance to be 14%, so caution and careful patient selection are needed before undergoing LIS.